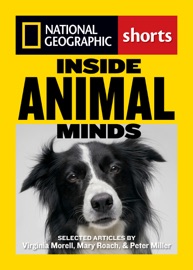 In “Minds of Their Own,” Virginia Morell provides an overview of the science of animal intelligence. She introduces you to an African gray parrot named Alex, a bonobo named Kanzi, and a border collie named Betsy. Each of these animals tells us something interesting about the way they perceive and manipulate their world. The article also looks at what scientists are learning about the intelligence of dolphins and crows, beyond mere communication.

In “Almost Human,” Mary Roach takes us to the savannahs of Senegal to meet a group of 34 chimpanzees, whose behavior and social structures have given scientists some important clues about the nature of their communication and intelligence.

In “The Genius of Swarms,” Peter Miller looks at the collective behavior of ants, bees, and other insects for what they can tell us about social organization and how sometimes intelligence lies outside of the individual brain. This article served as the basis for his book, The Smart Swarm: How Understanding Flocks, Schools, and Colonies Can Make Us Better at Communicating, Decision Making, and Getting Things Done.